We are excited to host the KYOTO CHOREOGRAPHY AWARD 2020 through our Contemporary Dance Choreographer Training Project “Dance de Ikou!! Dance it is!!”. This event aims to be a stepping stone towards new activities for emerging choreographers. We have received over 50 applicants, and following a document screening process, have selected 6 artists. Over the course of two days, they will be performing their work at Kyoto Art Centre. Three artists will showcase their work a day, followed by a discussion panel with the audience. A ceremony for each award will be held in the evening on the second day of events.

Your votes will open up the future of these emerging choreographers!
In addition to the live performance series (tickets required) and deciding the Audience Award through audience voting, we have decided to distribute our ticket sales (from live performances and online viewing) to the performing groups according to the number of votes we receive from audience members. People who attend a live performance at the Kyoto Art Centre will also receive one vote to cast.

*The awards are as above. The Kyoto Award, Encouragement Award, Fighting-Spirit Award and Best Dancer Award will be selected by the juries. Please note the possibility that no artist is eligible for these awards.

*IMPORTANT-Please read BEFORE purchasing an online-viewing ticket
This performance will be streamed online using Confetti Streaming Theater, however credit cards issued outside of Japan (including VISA, MASTER, JCB, and Diners) are currently not authorized to purchase a ticket. Additionally, a Japanese mailing address is required to become a member of Confetti to purchase a ticket. Please note the website is only available in Japanese. We apologize for any inconvenience.

* For Japanese audience members living overseas; you will be able to purchase a ticket and watch the showing as long as you have a credit card issued in Japan.
When registering as a member, please use a Japanese mailing address.

For any inquires, please email us at kca@jcdn.org

Dancing fools, watching fools (*Part of an old Japanese proverb)
There is an obvious “distance” in this lyric.
Distance between the dancing person and the observer.
We’re all fools, so let’s all dance (*Other part of the same proverb)
Someone is trying to enthusiastically close the distance between the two,
But what was the purpose of dancing to begin with?
The word “Contemporary”; which era was this terminology for?
What are the losses of not dancing?
By the time I paused to catch my breath, trying to answer these questions, the world was already midnight.
What do people see / think / do?
At this late time of night, we look deep into the abyss of these actions.

Equilibrium continues to be out of balance. Considering dance as a “tool” in society.

We create works around the theme of dance prior to it becoming a Performing Art. In our work Balance, we consider dance as a "tool" in society, exploring the balance of the "exterior" as a method of communication represented by the body and movement, and the "internal" as anomie caused by unsuccessful technique and choreography.

Into the calmly approaching darkness of the cogwheel that hurries slowly…

What does death, emptiness and love mean for Tartarus, the god of Abyss?
Into the calmly approaching darkness of the cogwheel that hurries slowly…
プラットフォームとは >
年間スケジュールを見る >

Choreographer’s biography
FujiyamaAnnette was founded by Ney Hasegawa in 2003. Through collaborations with new creators from various genres, the company focuses on methodologically pushing the boundaries of Performing Arts genres to refine the true essence of the artworks.
Hasegawa is best known for Attack on Dance (2014/2016), which was performed in various locations including Beijing, São Paulo and Yokohama. He has participated in the Theatertreffen's International Forum (Berlin, 2017), received support by Steep Slope Studio (Yokohama,2018), and was an artist-in-residence at TAIPEI ARTIST VILLAGE (Taipei, 2019).
Other recent works include ENIAC (2017/18) and FOG NATION (2019).
Through his artistic activities in Japan and abroad, he seeks to find and cultivate new ideas emerging from Asia.

Choreographer’s biography
The duo began working together as theatre makers in 2012. Collaboratively, they explore the different forms and values of the performing arts while developing new styles of expression and production methods without being bound by established concepts. Their works are heavily based on on-going relationships with the environment and people through communication, and they actively collaborate with new artists on new projects.

Choreographer’s biography
The dance duo  (Hanamoto Yuka x Matsuki Moe), established in 2008, explores choreography and directional choices through collaboration. Since 2015, Matsuki has been focusing on the direction and composition within their collective works, which have been performed in cities such as Kyoto and Tokyo. She is also a member of the ANTIBODIES Collective, a group of performers coming from various backgrounds and movement genres. Matsuki is a graduate of Kyoto University of the Arts in Film and Performing Arts. 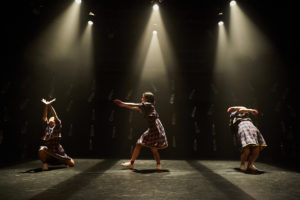 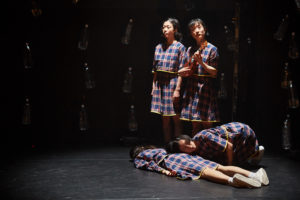 The work Snow on the seafloor is an excerpt using the sea as a motif.
While information on faraway places are now readily available,
How much are we really capable of seeing the truth?
The horizon where the ocean and sky meet is visible from many different seas,
yet they are too far away to imagine what lies beyond.
There must be countless invisible flows even in the depths of the sea where I now stand.
The only way to find out is to go into the water —overwhelmed by the obscure,
the truth is; we know absolutely nothing at all. 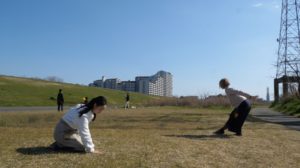 Landscapes seen today, tomorrow, and in the everyday

Kurashi indicates daily life.
As a new work in our ongoing project series "Kurashi ", we have been in creation since January 2020, thinking about the migration of physical places. We see dancing and living as a continuous act; dancing happens with a body that remembers the changing events around it, imprinted with transformations. We will approach this performance with thoughtful consideration of the viewers’ gaze, and borrowing their presence.
Through the concept we call “Kurashi”, we would like to share the fact that we are both present in this time, alive together, recognizing those we share the present moment with.

This work is based on The United Red Army case that lynched and killed comrades under the name of "unification". It is my own interpretation on the ideologies inspired by this incident.

The Japanese United Red Army lynched and murdered their own under the
guise of "unification". This incident struck and culled me to launch my own ideological creation as a choreographer. During the creation period, I filtered through and solidified vague ideas into ideologies, and have been preparing for this performance with my own comrades. I think of it as a choreographer's mission.
However, in reality, the act may be completely meaningless. I yearn to devote myself to the romantic act of “dancing”. At the same time, I want to be a hero, a revolutionary warrior.
*Background history: In the late 1960s, many students in Japan participated in radical revolutionary movements. One of the extremist student groups, the "United Red Army", started a community life in the mountains to become revolutionary warriors. However, as a result, many massacres occurred between comrades.
Inspired by this incident, my aim was to create a work based on group psychology; to consider the types of group psychologies that could exist in a dance company.
プラットフォームとは >
年間スケジュールを見る > 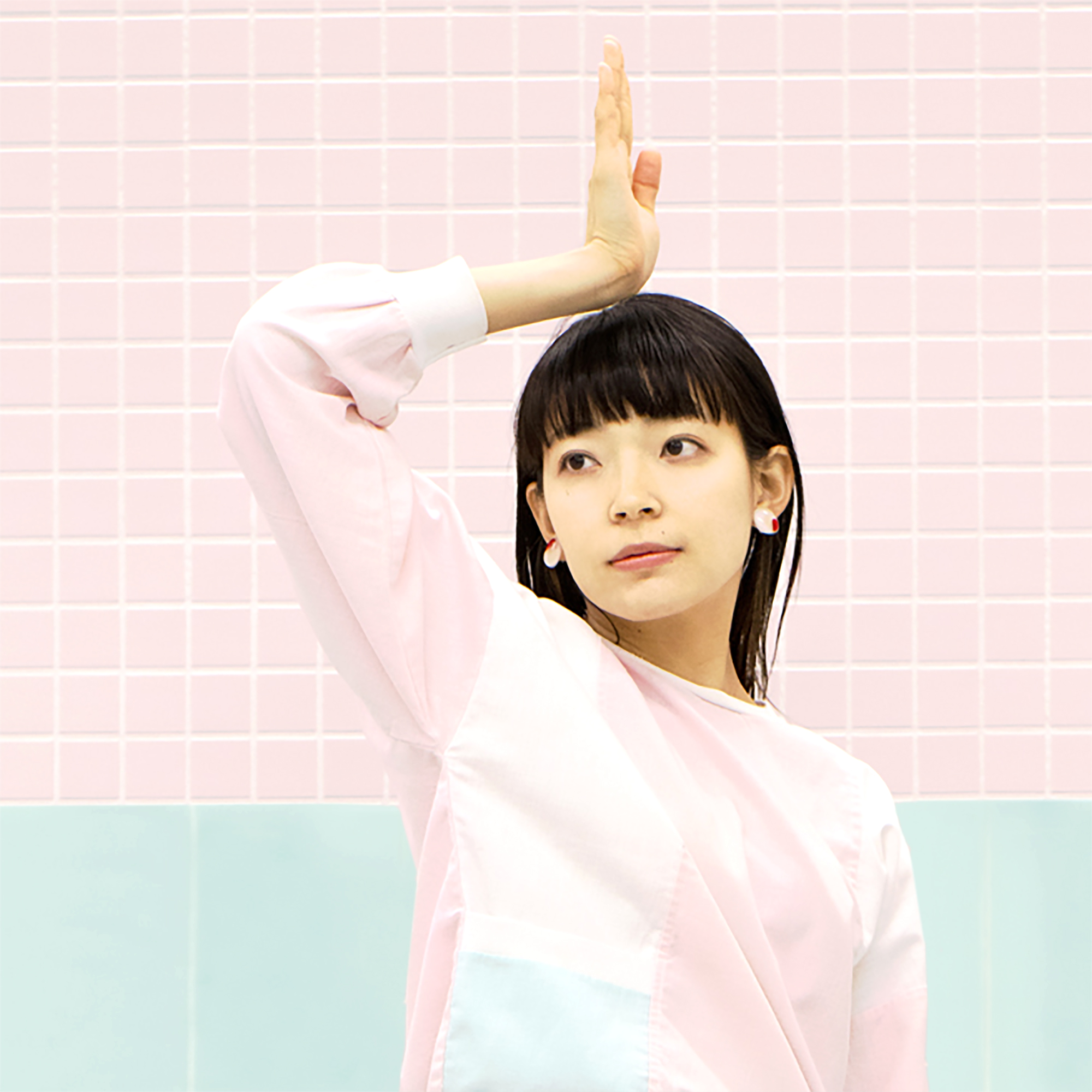 Choreographer’s biography
A Nagano prefecture native, Yokoyama launched an all-women dance company lal banshees in 2016. She has developed a unique choreography style based on hip-hop and modern dance techniques, focusing on deriving movements of the body without being confined. She has intentionally been focusing on the female body, releasing works featuring neutral gender expressions and deep relationships between sound and movement. She embodies a music-focused dance that imaginatively isolates mundane moments, while bringing them back to reality. 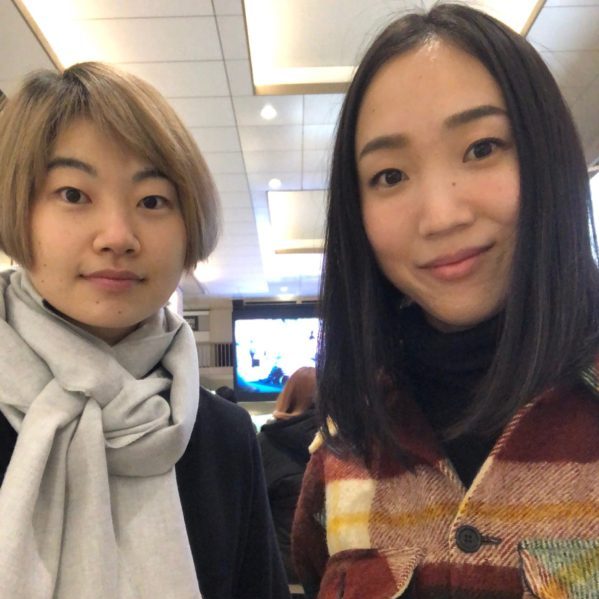 Choreographer’s biography
Nakane and Uchida founded their collective and started collaboratively creating works in their second term of Domestic Dance Study Abroad @ Kobe, sponsored by NPO Dance Box. Since 2018, based on the concept that everyday living leads directly to dance, they created the project series "Livelihood" that aims to share time and space with the objects present around them, and the people who come and go. Through multiple performances, they allow the work to transform gradually.

Choreographer’s biography
Born in Kagoshima prefecture, Shimojima began studying dance at the age of seven focusing on Yosakoi dance, a unique style of Japanese dance performed at festivals throughout the country. She studied contemporary dance under Kuniko Kisanuki at J. F. Oberlin University, and formed the dance company KEDAGORO in 2013, for which she choreographs and produces work. Based on the idea of "dance as a method to explore the world," she learns about the world through meeting people and expresses her ideas through choreography. Her renowned solo work Monkey in a diaper has been performed at numerous festivals in Japan and overseas. Shimojima is the recipient of the 8th Elsur Foundation New Face Award for Contemporary Dance.